According to the legend, the Orloff Diamond, at one time the third largest cut diamond in the world, was set in the eye of the Hindu god Sri-Ranga in a temple in Srirangem, in southern India.

(Many diamonds share this same past, it seems that at one time or another almost all the famous diamonds in the world were once in a statue!)

The Orloff is an antique rose cut diamond (flat bottom, and faceted domed top), weighing approximately 194 carats, about the size of half an egg. It has never been weighed, though once during cleaning in the early 20th century it fell out of its mounting. The jeweller performing the cleaning weighed it before putting it back into its mounting. Unfortunately, he never wrote down the weight. It is a pure colour, with a slightly blue-greenish tint. It measures approximately 32mm by 35mm by 31mm.

Accoring to the story, it was stolen from the temple by a French soldier, who had deserted from Dupleix’s army after fighting in the Carnatic Wars. The soldier fled to Madras and sold the stone to a sea captain for £2,000.

The captain, in turn, is said to have sold it in London for £12,000 to a Persian merchant named Khojeh Raphael, who took it to Amsterdam. For this reason it is sometimes called the “Amsterdam”.

In 1775 the Russian nobleman, Count Gregory Orlov, bought the big egg-shaped gem for a vast sum of money and presented it to Empress Catherine, in an attempt to regain his place as her favorite.

The prince was out of favour because of his poor handling of the Ottoman-Rusian crisis. He offered her the diamond on St. Catherine’s Day in 1776, instead of the traditional bouquet of flowers. She accepted the diamond but refused to reinstate Orloff to his former powerful position in the Court.

Catherine never wore the Orloff, but had it mounted in the top of the Imperial Scepter, where it remains to this day, in the Kremlin Museum.

Count Orloff because increasing despondant at his fall from grace, and eventually went mad, dying in an asylum in 1783.

Below is The Orloff Diamond in the Imperial Sceptre 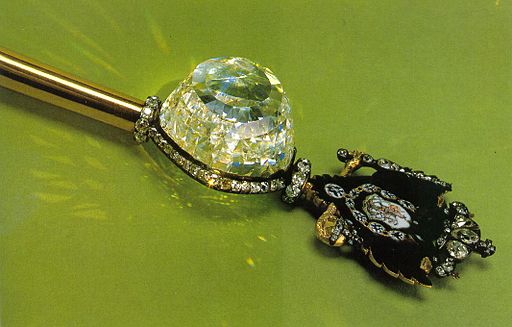