Some of the world’s most famous diamonds are not as bright “in the flesh” as they may seem in photographs. A visit to the Tower of London to see the Star of Africa is slightly disappointing, as the high security means that the light is poor, and the diamond fails to sparkle as well as it might…. This is not the case with the Pitt-Regent diamond. Generally considered the most beautiful of the “Famous” diamonds, it is breathtaking, even through the security glass of its case. Currently in the Louvre in Paris, less than two minutes from the Mona Lisa, this is the highlight of a diamond lover’s trip to Paris. Cushion cut diamonds are old cuts, generally pre-1920s. They are characterised by smaller top facets (”tables”), and slightly deeper proportions. This results in greater light dispersion. The down-side to this is a slight loss of light from the bottom of the diamond, though this is generally less that one percent of the light falling on the stone. The Pitt-Regent is a 140 carat cushion cut diamond, of fantastic fire and life. Originally known as the Pitt, this extraordinary stone was one of the last large diamonds to be found in India. 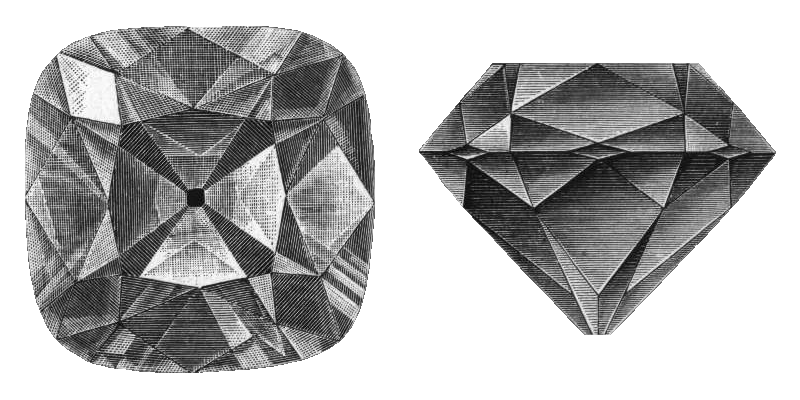 It is said to have been discovered by a slave in about 1701. The slave stole the diamond, and concealed it in bandages of a self-inflicted leg wound, and fled to the coast. There, he divulged his secret to an English sea captain, offering him half the value of the stone in return for safe passage to a free country. But during the voyage to Bombay, the captain murdered the slave took the diamond. After selling it to an Indian diamond merchant, the captain squandered the proceeds and, in a fit of remorse, hanged himself. In 1702, the stone was sold to Governor Thomas Pitt of Madras. He sent it to England and had it fashioned into a 140.50 carat cushion-shaped brilliant cut. The cutting took two years and cost about £25,000. Selling the diamond proved difficult, and Pitt suffered a fear of theft or robbery of the diamond, unsurprising considering how he acquired the diamond in the first place! He rarely slept in the same place for two nights running, disguised himself whenever he had the diamond on him, and refused to ever show it or admit that he had it. In 1717, the gem was sold to Philip II, Duke of Orleans, then Regent of France; since that time, it has been known as the Regent Diamond. In 1792 it was stolen from the Garde Meuble, but quickly recovered, hidden in a ditch off the Champs Elysée In 1825, Charles X wore the Regent at his coronation; it remained in the Royal Crown until the time of Napoleon III. Then, a place was made for it in a diadem designed for Empress Eugenie, as according to custom French queens are not actually crowned.

Many of the French Crown Jewels were sold at auction in 1887, but the Regent was reserved from the sale and exhibited at the Louvre among the national treasures. In 1940, when the Germans invaded Paris, it was sent to Chambord, where it was secreted behind a stone panel. After the War, it was returned to Paris and put on display in the Apollon Gallery of the Louvre Museum. Personally, I’d recommend skipping the Mona Lisa, and head straight for this!