Hallmarks are authenticating marks struck on most silver items produced or offered for sale in Ireland. Since 1637 the Assay Office in Dublin Castle has been the only body with the authority to perform this task. The marks serve several functions:

* they verify that the item is of the correct quality. In Ireland, sterling silver is not less than 92.5% pure silver, the rest is alloy.
* they give the year of manufacture.
* they record the maker or sponsor of the item.
* where appropriate, they record that duty has been paid on the item.

Below are a few examples and a guide to reading antique Irish silver hallmarks, followed by photos of as many date letters as I could manage.

The photo below shows a typical set of antique Irish silver hallmarks.

From left to right, the marks are:

1. JS; this is the maker, John Smyth of Dublin.
2. Lower case “L”. This is the stamp for 1856
3. The harp crowned, the purity mark. This shows that the article is sterling silver.
4. Hibernia. Originally this was a tax “for the encouragement of tillage”, but after 1806 when Irish silver was struck with the king’s head duty mark it became the mark signifying the Dublin Assay Office.
5. The queen’s head. This was a duty mark. 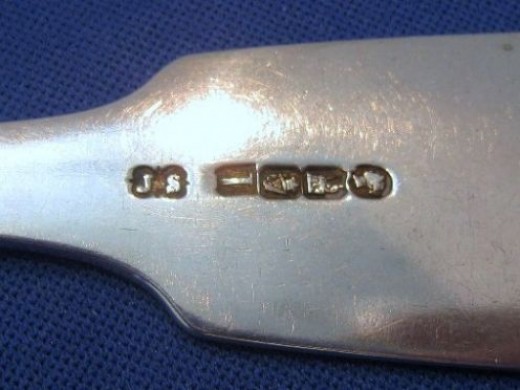 Next is a much older set of antique Irish silver hallmarks. Unlike the first photo, the marks are not in an orderly line. This is normal. Clockwise from the top left we see the harp crowned (purity), the letter “h” (1727 in this case), and TW for the maker, Thomas Walker. The Hibernia mark was only introduced in 1730, and the monarch’s head mark came in in 1806, so we do not expect to see either. The little “dot” beside the H is normal, and a relic of the silversmithing of the piece.

For a piece of this age, these would be considered excellent marks. 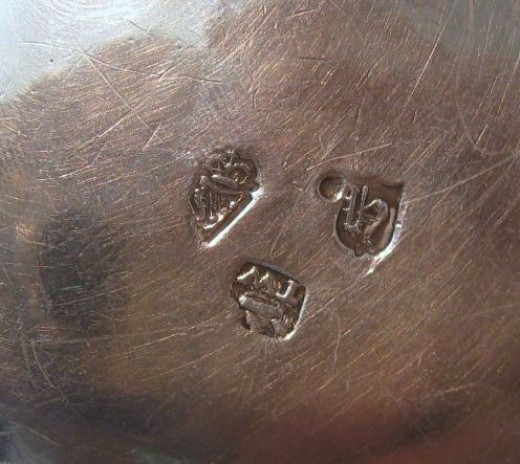 Although Dublin was the only official assay office in Ireland, in the 18th century several exceptions occured; at the time the risk of highwaymen stealing the silver was ever present, so silversmiths in certain cities, notably Cork, Galway, Kinsale, Youghal and Waterford, didn’t send their wares to Dublin but instead stamped them themselves. Though technically they were breaking the law, this interesting quirk of history gives pieces from these locations their own unique history and charm.

The photo below shows typical Cork marks; JN, for John Nicholson, stamped twice, either side of the word “Sterling”. 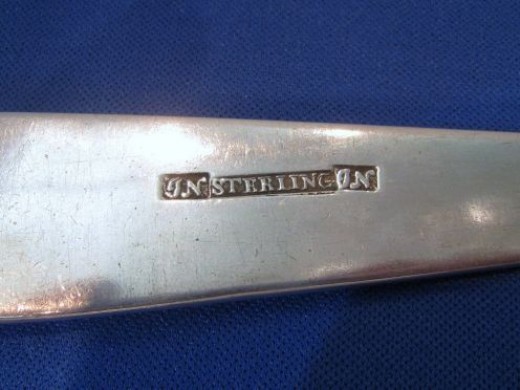 The year in which a piece of Irish silver was made can be determined by the date letter – this is one of the marks described above, applied by the assay office when it is hallmarked. As there are only 26 letters in the alphabet, they are reused, which each cycle slightly different to the preceding one. However, sometimes it can be a challenge to identify which year a piece of Irish silver was made – the differences between some of the cycles can require a trained eye.

This post is quite long, apologies to fans of diamond photographs! There are 90 images (or so) of date stamps from the last 300 years, which should help to determine the age of a piece. Originally the letters cycled every 24 years, one year per letter of the alphabet, excluding J and V. In the modern era, these letters are included, giving a 26-year cycle.

Please do bookmark this page, I’ll try to fill in the gaps bit by bit! Over time it will hopefully grow to be a complete listing of Irish silver date letters.

There is a big gap from 1737 until 1758, and towards the latter half of the 20th century, hopefully I can do something about that soon!