The Three Brethren Jewel was a cloak clasp, set with gemstones, known to have existed in the 15th and 16th centuries.

Made during the first decade of the 15th century, the Three Brethren jewel is an extremely mysterious and intriguing piece, whose value today, if it was still intact, would be incalculable.

It was comprised of a large centre diamond, surrounded the three enormous spinels (hence the name), and with four gigantic Oriental pearls. (For comparison, Elizabeth Taylor’s antique pearl, of similarly impressive provenance, fetched 11 million dollars in 2011). The centre stone weighed approximately 30 carats, based on calculations from paintings of the piece. It had an unusual cut, with each side coming to a point. In the early 15th century it was the largest faceted diamond known in Europe.

The documentation in relation to the jewel’s early history is good; the first mention of it dates back to 1412, when Duke John’s jewellery and plate were pawned. Charles the Bold, Duke of Burgundy from 1467 to 1477, is known to have owned it in 1467, when his inventory states that it was “Un Gros Dyamant Pointé a Fass”

It is thought that his successor, Philip the Good, sold the piece to a banker called Fugger, who offered it to Henry VIII in 1546. Fugger drew a detailed sketch of the piece, shown below. This is our best visual representation of the piece. You can clearly see that the stone in the centre is a “pyramid” shape, or slight variant of. The detailed reflection pattern also helps us to interpret the proportions and cutting style. While the written descriptions clearly indicate a cut that was an imitation of a regular trisoctahedron, the illustrations neither confirm not contradict this but indicate only that the main facet edges were ground down to very narrow facets. In the drawing by Fugger, which is carefully executed, the ‘shadow’ of the reflections also disguises the top part of the faceting.

The jewel was bought in 1551 by Edward VI. The piece became one of the favourites of Elizabeth I, and featured in several portraits, see below. 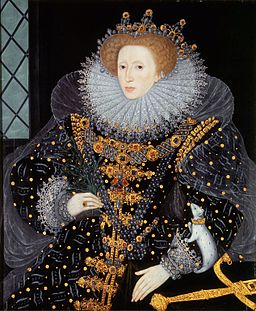 As discussed, the exact cutting style is a mystery, as the only illustrations we have of it, such as the above portrait of Queen Elizabeth I, show the piece from directly above, and the relatively heavy setting hide a portion of the gemstone. Norris in “Tudor Costume and Fashion”, p. 602 (Dover re-issue 1997), describes her dress – “The lines of the black velvet dress, pounced all over with cuttes and engraved gold buttons, headdress, and circular ruff, suggest that the style is of the same make as described under the ‘Portland’ portrait… The cutwork, of which the circular ruff and cuffs are composed, is a very beautiful specimen of the lace-makers’ craft… The jewels worn are diamonds, rubies, emeralds, and pearls. An ermine climbing up the Queen’s left wrist and peering into her face has given the title to the painting. As an emblem of chastity, the ermine was an especially appropriate compliment to the Virgin Queen.”

In 1623, we know that the stones were removed and remounted in a more fashionable setting, though there appear to be no illustrations of this.

By the 18th century it was stated to have been purchased by an American, whose name was never revealed. This is the last known information we have of it, and it is unclear at what point it left the Royal Collection. If it is still intact, it would have the pride of place in any museum in the world!