The Nassak diamond is a 43 carat diamond, discovered in India in the 15th century. Originally it weighed over 90 carats, but was re-cut several times over the years, most recently in 1940. It is an elongated triangular shape, with rounded corners, and described at the 1933 World’s fair in Chicago as the finest diamond in the world outside of royal collections. In 1964 the GIA graded it as internally flawless. 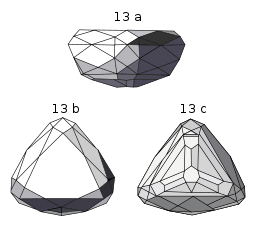 It was set in a statue of Shiva in Nashik, India, up until 1817, when it was sold to Rundell and Bridge, a British jeweller, for £3,000. They held onto it for 13 years, during which time they re-cut it, down to 78 carats. The cutter was instructed, as far as possible, to follow the shape and form of the original stone. They sold it to the Emanuel Brothers in 1831, and six years later they sold it to Robert Grosvenor, 1st Marques Westminster, who mounted it into the handle of the dress sword of the 1st Marques of Westminster. Its value at this stage was between thirty and forth thousand pounds sterling. The large gain in value was attributed to the gain in brilliance following the re-cutting.

In 1927 it was imported into America in 1927, which provoked a number of lawsuits as to whether it was an artistic antique (hence tax-free), or a diamond for use in jewellery (which would have had a 20% tax). The latter was ultimately found to be the case!

In 1929 it was nearly stolen when the Park Avenue store it was in was robbed; it would have been taken except that it was stored in a soiled envelope. It was again almost robbed in 1930, in similar circumstances, but was missed a second time.

In 1940 was bought by Harry Winston, and in 1944 Mrs. William B. Leeds of New York received the gem in a ring as a sixth anniversary present. The Nassak Diamond was last sold at an auction in New York in 1970 to Edward J. Hand, a 48-year-old trucking firm executive from Greenwich, Connecticut. He paid 500,000 dollars, at that time the second highest price ever paid for a diamond at auction.

Below is a life-size replica of the stone.