The 128 carat Tiffany diamond is one of the most famous large gemstones in the world, and has its regular home in a display case inside Tiffany and Co’s 5th Avenue store in New York.

Discovered in 1877/8, in South Africa, the rough weighed 287 carats. At the time it was the largest yellow diamond ever found. Charles Tiffany purchased it in 1879, and it has remained in the possession of the company ever since. It was cut into a beautiful cushion cut stone, to maximise the depth of colour.

In 1893 it was exhibited at the Chicago World’s Colombian Exhibition; in 1955, in its only appearance in Tiffany’s Fifth Avenue windows, the Diamond is placed in the hands of a gold wire angel.

The stone is known to have been worn by only two women during its lifetime. It was worn by Mrs. Sheldon Whitehouse at the 1957 Tiffany Ball held in Rhode Island, mounted for the occasion in a necklace of white diamonds. It was also worn by Audrey Hepburn in 1961 publicity photographs for Breakfast at Tiffany’s.

In a wonderful advertisement, below, the stone was offered for five million dollars for a 24 hour period in 1972! (It is worth putting the sum in the context of diamond prices at that time; a few years earlier, in 1969, the Taylor-Burton diamond had become the first million dollar diamond, when Cartier paid 1.05 million dollars for it. Burton had been underbidder at the auction, and subsequently negotiated a price of 1.1 million dollars) 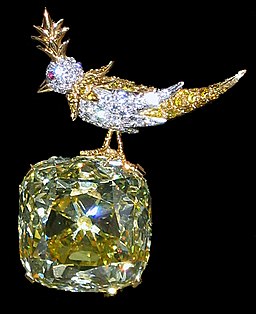 It was mounted by Jean Schlumberger into a brooch with bird at the upper corner, called “Bird on a Rock”.

In 2012, to celebrate the 175th anniversary of Tiffany & Co, the stone was reset into a dazzling necklace, and is still on display in the flagship store in New York.