While many diamonds are supposedly cursed, very few have as unfortunate a history as the Maximilian Diamond. The story takes us from the jungles of Brazil to a New York City Dump.

It first comes onto the scene in the 1860s, when Archduke Maximilian of Austria travelled to Brazil. He was the younger brother of the Emperor of Austria, and rumoured to have been the secret child of Napoleon. A keen observer of nature, he had travelled there on a botanical expedition. While in Brazil, he purchased two stones; the larger became known as the Emperor Maximilian (more about that diamond another day!), and the smaller, a 33 carat cushion cut diamond, became known as the Maximilian. He gave the Maximilian to his wife, Princess Carlotta of Belgium, who wore it as a pendant.

Shortly before the expedition, the Archduke had been approached by some Mexican exiles with a view to assuming the Throne of Mexico. He turned down the offer. The exiles then approached Napoleon to convince him that with his support Mexico could rise again. Napoleon urged Maximilian to accept, which he eventually did.

It was an ill-fated plan from the start, lacking popular support and relying on French troops to maintain power. In 1866 Maximilian drafted an abdication, but stayed on in Mexico. His wife returned to Europe to seek aid. The Empire collapsed, Maximilian was captured, court-martialled and, on the 19th of June 1867, executed. The execution was the subject of a famous series of paintings by Edouard Manet, below. 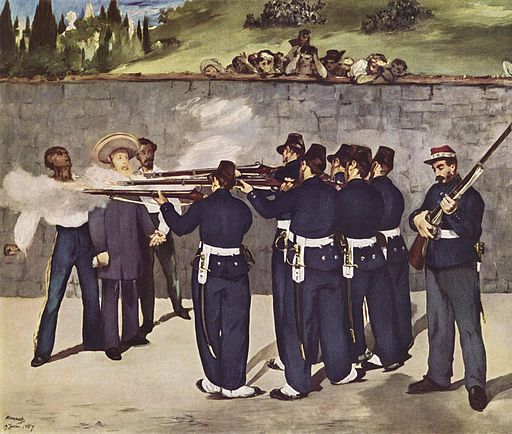 After this, the diamond disappeared until 1901, when two Mexicans were caught trying to smuggle it into America. The diamond was seized, and auctioned off, fetching $120,000. It is not clear who bought it or where it was kept for the next few decades. We know that in 1946, it was owned by a New York jeweller called Morris Nelkin. He owned it for fifteen years, keeping it in his house. Unfortunately, during a suspected burglary, a family member hid the diamond in a rubbish bin. The rubbish was subsequently emptied, and despite searching the local dump, the diamond was never seen again! We have no pictures of it, so the image on this blog post is of the larger stone, the Emperor Maximilian!