Peridot is a gem variety of the mineral olivine, which is found in peridotite rock from the earth’s upper mantle. It was known since antiquity, and for many centuries it was only found on a small island in the Red Sea, today known as Zabargad Island. 2500 years ago, no boats were ever left there overnight (in case any inhabitants tried to escape!), and it was permanently manned by soldiers, to protect the mine. This mine was forgotten about at some stage in history, and not rediscovered until 1900. Its name comes from the Greek word ‘peridona’, which means something like ‘to give richness’.

Once upon a time, peridots were one of the most precious gemstones in the world, and it is known that Tutankhamen had a fine specimen in his collection.

It was highly prized in ancient times – in the era of Ptolemy Philadelphus, a statue of his wife, standing four cubits high, was made of peridot. As late as the sixteenth century they covered the Ottoman sultan’s throne. In the middle ages, it was brought back to Europe by Crusaders and used to decorate churches and alters.

Peridot and diamond are unique in how they form – they are the only two gemstones that form below the earth’s crust. Peridot is carried to the surface of the earth by a surge of magma on its way to erupt from a volcano, or a strong earthquake. Interestingly, it can also fall to earth from space, in a meteorite; “Pallasite” is a type of meteorite composed of large peridot crystals in a iron-nickel matrix, see the image below. It has also been discovered on the surface of Mars, where there are at least 19000 square miles of peridot crystals, and on a comet; in 2004, NASA collected samples from the Wild2 comet, and found traces of Peridot about 4.5 billion years old.

Today, most peridot comes from rather more humble origins, largely from a mine near the eponymous town of Peridot, San Carlos Reservation in Arizona, USA, and some mines in Pakistan and Afghanistan.

The largest cut peridot olivine is a 310 carat specimen in the Smithsonian Museum in Washington, D.C., also the home of the Hope Diamond. This is quite small in the context of the largest known example of some other gemstones such as diamond and sapphire!

The intensity of the shade of green is dependant on the level of iron present in the stone. Generally speaking, the most valuable stones are the most intense greens, with wonderful saturation. 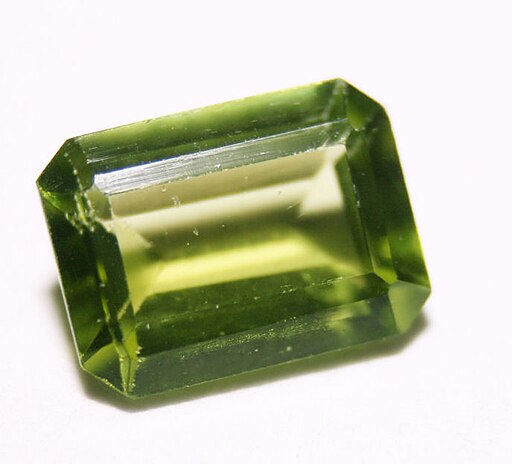