During the invasion of Spain in the early 1800s, the King of Spain, Charles IV, knew that Napoleon’s march on Madrid was not going to be stopped. So, for security, he had the Crown Jewels of Spain and a priceless collection of clocks walled up in two of the 365 rooms of the Royal Palace for safekeeping. Due to the size of the palace, and in case something should befall Charles, the advisor who hid the items (a trusted friend of the King), gave the King a piece of the wallpaper from each room as a reminder of which particular room held the treasures.

The King fled into exile, and Napoleon took Madrid.

However, the Napoleonic style of interior design was quite different to the Spanish style, and after having been installed by Napoleon, the new Governor of Spain embarked upon a lavish redecoration of the palace.

The King’s son, Ferdinand VII, got the throne back in 1814, and wanted to find the jewels. The only problem was that the wallpapers and draperies in every room had been changed, and nobody had any idea where the jewels were located! The choice was either to tear down the walls of every single room until they were found, or leave it be. Ferdinand chose to leave the walls alone. The image below gives an idea of the size of the palace, and the difficulty in finding something hidden within! 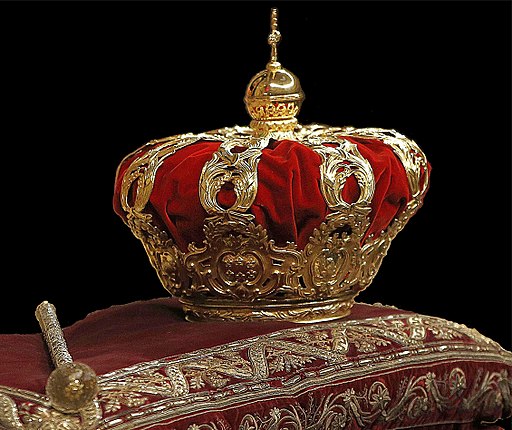 With the passing of decades, it was thought that the story was just a legend, until one day a plumber working on some pipes in the palace found the antique clock collection! It seems probable, therefore, that the collection of Royal jewels is indeed still in the palace, awaiting discovery when the technology allows.

There is a crown & sceptre used during Coronations, which are from the House of Bourbon, the house of the ruling family. They are not national treasures, but instead are personal possessions of the King. Made of silver gilt, they are in the Neoclassical style, and were made in the reign of Charles III (who ruled from 1759-1788). They are kept by the Patrimonio Nacional, and have been on public display since 2014. As no Spanish king has been crowned since 1494, the monarch-to-be instead swears an oath to uphold the constitution and is acclaimed as King. The crown and sceptre are present, but not placed on the King’s head.