A rather magical part of the antiques world is the connection that pieces can have to people and events of the past, and jewellery is no exception. Some pieces can have greatly changed the world around them, perhaps never more so than in the “Affair of the Necklace”, which was one of the events that ultimately lead to the French Revolution and the guillotining of Marie Antoinette.

The Affair was an incident in 1781 at the court of Louis XVI, where it appeared that Marie Antoinette had participated in a scheme to defraud the crown jewellers of France of the cost of an expensive necklace; her frivolous reputation was already problematic, and the population was losing patience with the spendthrift monarchy.

It began almost a decade earlier, in 1772, when the King, Louis XV, commissioned a wonderful necklace for his mistress, Madame du Barry. It cost almost two million livres, or the equivalent of about fifteen million US dollars in 2016. It was made by Parisian jewellers Boehmer and Bassenge. It took several years to assemble an appropriate set of diamonds, said to be of flawless clarity. It featured several large diamonds festooned with diamond pendants and tassels. Financing the necklace almost bankrupted the jeweller.

In the meantime, in 1774, the King died of smallpox, and was succeeded by his grandson, Louis XVI. The jewellers hoped that the new king would buy it for his wife, Marie Antoinette, but she did not agree to the deal. It is not known why, but two rumours exist; the first is that she remarked that the money would be better spent on a man-of-war, and the second is that she refused to wear a piece of jewellery that had been designed for another woman (especially a courtesan!).

The jewellers tried again in 1781 following the birth of the Dauphin Louis-Joseph, but she refused again.

There then followed an attempt by a con artist, the Comtesse de la Motte, to procure the necklace by fraud. The Comtesse approached the Bishop of Strasbourg, who was disliked by Marie Antoinette’s mother, the Empress of Austria. The bishop was eager to return to the good graces of the French Court. The Comtesse said that the Queen wished to buy the necklace discreetly, and would be prepared to welcome the Bishop back to Court if he would act as a middleman in the purchase. She forged letters, purportedly from the Queen, to back up the story, and arranged for a prostitute to disguise herself as the Queen and meet the bishop in the gardens at Versaille. The letters were signed “Marie Antoinette de France”, but the Bishop forgot in his eagerness to please that the Kings and Queens of France only ever signed with their given names.

Suitably convinced, the Bishop contracted to buy the necklace, pledging his credit; he was to pay for it in instalments. He gave it to the Comtesse, who gave it to a person who told the Bishop he was a valet to the Queen.

However, the Bishop failed to raise the monies to cover the first instalment, and the jewellers contacted the Queen directly, exposing the scheme. By this time, it was too late, and the necklace had been broken up and the pieces sold off in London.

The King had the Bishop arrested and imprisoned in the Bastille. He was sent to trial, but acquitted in May 1786. The Comtesse was arrested and found guilty; she was flogged, branded V on each shoulder (for “voleuse“), and imprisoned for life in Salpêtrière prison in Paris. She later escaped, and published scandalous memoires vilifying the Queen.

Marie Antoinette was blameless in the affair, but the damage was done to her reputation. It confirmed in the minds of the general public her lavishness and frivolity. The arrest of the Bishop, who was a naive but innocent piece of the story, was portrayed as an example of the King’s autocratic (and therefore undemocratic) nature. The image of the monarchy was immensely damaged and discredited, and malicious gossip concerning the Queen was widespread. Less than four years later, discontent with the Monarchy, the French Revolution broke out 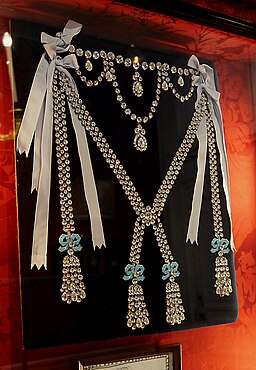