The Hope diamond is a 45 carat cushion cut diamond of deep greyish-blue colour, almost metallic blue, which for almost 60 years has been the star attraction in the Smithsonian Institute’s gem collection. It measures 1 inch by 7/8 inches by almost 1/2 inch.

When exposed to short wave UV light, the Hope glows red for some time after the light source has been removed. This effect is caused by traces of nitrogen and boron in its structure.

However, the most interesting thing about the diamond is a mysterious curse that supposedly brings ill-fortune or tragedy to whomsoever owns it. Dire tales are told of horrific deaths, financial ruin and lunacy striking the owners or their families.

But is any of it true? Unfortunately not!

The diamond that was to become the Hope was first documented by famous Silk Road Merchant Jean Baptiste Tavernier in the mid-17th century. He purchased a 112 carat triangular diamond. Tavernier describes it as “beautiful violet”Tavernier sold the diamond to Louis XIV in 1668. Louis had the stone recut by the court jeweller, Sieur Pitau. The diamond now weighed 67 carats. It was called the French Blue. In 1791, Louis XVI and Marie Antoinette turned the diamond (and other jewels) over to the government.

The French Royal jewels were looted in September 1792, and the French Blue was never seen again.

Interestingly, the statute of limitations for theft during wartime in France is twenty years, and, in what is almost certainly not a coincidence, twenty years and one day after the theft a large blue diamond turned up in London! Slightly smaller than the very recognisable French Blue, it had the same body colour and intensity as the Royal jewel.

Owned by diamond dealer Daniel Eliason, this diamond weighed 45 carats. For many years it was presumed that the Hope was cut from the French Blue, but it wasn’t for two hundred years that this was proven. In 2007 a previously unknown lead cast of the French Blue was discovered in a museum archive in Paris. This allowed scholars to establish for sure that the Hope was indeed cut from the French Blue. It also ruled out the Brunswick Blue diamond as a sister stone of the Hope. Read more about the Brunswick Blue diamond here: https://weldons.ie/the-brunswick-blue-diamond/

There is a rumour that the diamond was briefly owned by King George IV in 1823, though there is no evidence to back this up.

The next known owner of the diamond was Henry Hope, from whom the diamond gets its name. He was an avid collector, and it seemed had a genuine and deep love of the stone. He lived at Arklow House on Hyde Park, had a fortune which gave an income of £60,000 a year, spoke seven languages and was “Remarkable for his highly cultivated mind and his just and elegant taste in the Fine Arts”. He adored all things beautiful, perhaps, it was said (unkindly), because of “his remarkable ugliness”.

His collection contained a 455-carat pearl, sapphires, rubies, emeralds, and yellow, pink, green and black diamonds. However, his collection was missing a star attraction, a centrepiece. When he saw the Hope in 1824, he purchased it for £18,000.

Hope died in 1839, and the stone was the subject of massive legal wrangling between his heirs, before finally passing to his nephew, Thomas Henry Hope, and thence to TH Hope’s son, Lord Francis Hope.

Lord Francis Hope was a spendthrift, and burned through his inheritance, thought to be about $500 million in today’s money. There was a condition connected to ownership of the diamond that stated that he had the use for life of the diamond, but could never sell it. However after years of petitions to the courts, he finally obtained permission to sell it to settle debts.

It was bought by a London dealer, who sold it on to a New York dealer, Joseph Frankels and Sons. It was then bought by Selim Habib, who ran into financial difficulties, and ended up selling it. The diamond ended up with Pierre Cartier. 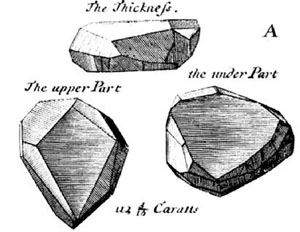 McLean owned it until her death in 1946.

Harry Winston bought the diamond from her estate, and owned it for about ten years, before donating it to the Smithsonian in 1958. He famously mailed it by registered post to the Institute in a brown parcel. He paid $145.29 to mail the package, of which postage accounted for only $2.44, the rest was insurance for one million dollars! It is still there today.

So, what of the “curse”? There is no record of a curse until the early 1900s, when it appears to have been invented or exaggerated by the then-wife of Lord Hope, an american songstress called Mary Augusta “May” Yohé . She was a fan of being pursued what today would be called Paparazzi, and played up every opportunity to bring the spotlight on herself.

Cartier also used the curse to help sell the diamond to Walsh McLean, rightly guessing that it would attract her to the diamond.

The list of victims of the curse is extremely long, including

However it is almost all fictional, irrelevant or peripheral to the cause. The trouble with storytelling and curses is that they become applied to any negative event in the persons life (for example, a car crash suffered by McLean long before she owned the diamond). Time and retelling make the stories more apocryphal, and a narrative is drawn which is quite threadbare! 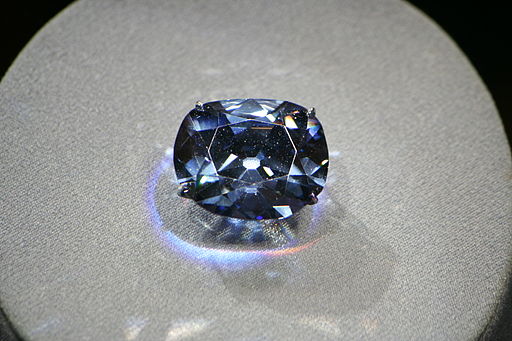 Tavernier was not killed by dogs, but rather died peacefully, an old man, in Russia many years after handling the gem. Louis XIV died peacefully at 76 years of age, hardly an accursed lifespan in the 18th century. He had mistresses, certainly, so losing his affections was more a reflection of his personality than the ownership of a diamond. After Louis XIV’s death, the stone went to Louis XV, who held it uneventfully until his death at the age of 64.

Fouquet was apparently an embezzeler, so any misfortune was of his own making.

It is true that Louis XVI and Marie Antoinette met an unpleasant end at the guillotine, but the cause of the French Revolution is certainly not connected to a diamond!

The mystery re-cutter is unknown, so there is no story there.

Two generations of the Hope family owned the diamond without any bad luck at all. Lord Hope was a relentless spender and gambler, who lived the high life with gusto. He married an American singer, an outrage in an era when noblemen were expected to marry bluebloods, and take such ladies for lovers. He and his wife systematically spent every penny they could get a hold of, and more. Even under instruction from the courts to rein in their spending, they wouldn’t or couldn’t, and spent years battling the courts and his family to alter the conditions of the will so as to sell the diamond.

The is no concrete evidence that Prince Ivan Kanitovski owned the diamond, though there is a period of a few years where the ownership is unclear. The likeliest explanation is however rather dull, that it remained in the safe of Frankels and Sons, making this part of the story somewhat far-fetched.

The poor victim of the shipwreck was a man called Selim Habib, but not the same man as the brief owner of the stone, rather a namesake.

Cartier owned the diamond without any bad luck.

McLean certainly had some bad luck, though perhaps more understandable when one looks at the life of the super rich in that time, full of drinking and partying, and with a whirlwind of a social scene. The power that immense wealth brought could cause as much troubles as it solved.

Winston owned the diamond without any bad luck. It is said that he donated the diamond to avoid any ill-fortune, however he was in fact persuaded to donate it to kick-start the Institute’s collection and help to create what has become a world class attraction.

Michelle Pfeiffer wore it for Life Magazine in 1996 without any ill-effects.

It seems that the curse was a sales ploy by Cartier to convince McLean to buy the diamond, as she had once remarked to her husband that things that brought bad luck to others brought good luck to her. It also snowballed during the 1920s (a great era for curses, such as the curse of Tutankamun’s Tomb) when May Yohé was trying to publicise the 1921 movie serial “The Hope Diamond Mystery”, which she helped write and promote. The most sensible explanation is that there is no such curse, and that over time any bad occurrence, no matter how trivial or distant to the then owner, became linked to the diamond. The list of owners who lead long and happy lives shows that luck is what one makes of it!