Reposing in the same gallery of the Louvre as the Regent Diamond, the Hortensia diamond is a wonderful stone which goes to show that even a flawed diamond can be breathtakingly beautiful.

Weighing 20 carats, it is a lovely orangey-pink colour, cut into a five sided shape. It has a large crack extending from the girdle to the culet, visible to the naked eye.

It is named after Hortense de Beauharnais, Queen of Holland, stepdaughter of Napolean Bonaparte, and mother of Napoleon III. What is interesting is that is that she never owned it, nor is she documented as having ever worn it. Why is came to be named after her is a matter for speculation.

Hortense de Beauharnais was born in Paris, the daughter of Vicomte de Beauharnais and Josephine Tascher de la Pagerie. An unhappy marriage, when Josephine divorced she went with her daughter to a convent, and subsequently to live in Martinique. Hortense’s father was to perish in the Reign of Terror.

After years in Martinique, Hortense and her mother returned to Paris. Her mother worked her way back into society, remarrying, this time to the future Napoleon Bonaparte. Now the step-daughter of the French leader, it was important that Hortense married well. When she was of age, she was wed to Napoleon’s brother, Louis. Louis was appointed King of Holland in 1806, making Hortense the Queen.

The marriage to Louis was an unhappy one; she lost her eldest son, suffered rumours about the parentage of her third son, the future Napoleon, and an acknowledged illegitimate fourth son. 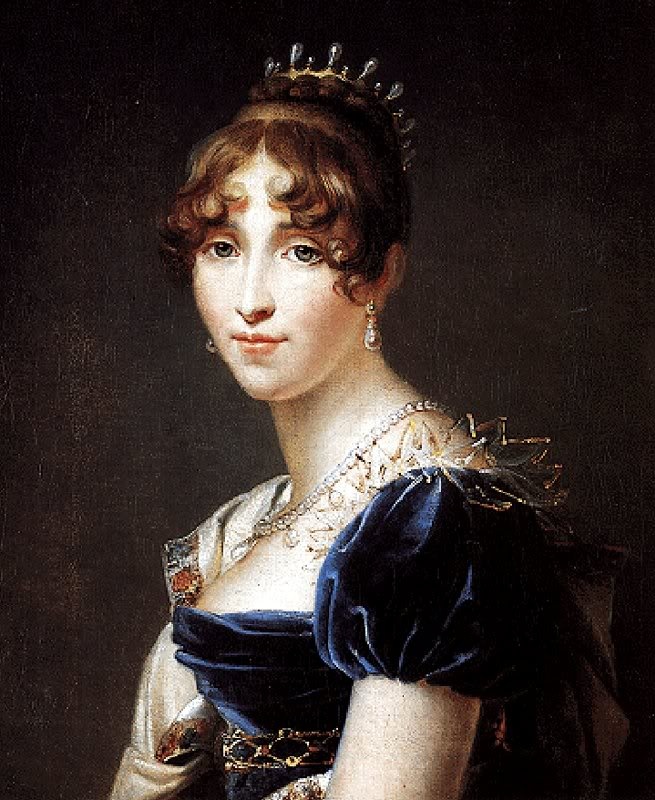 Precisely why, or indeed when, the diamond became known as the Hortensia is unclear, though it seems to be between 1806-1817. Was her brother-in-law one of her many lovers, or was it simply on account of her status as Queen? Was it because of her support of Napoleon during his exile?

Sadly, it will remain a mystery!

The Hortensia was mentioned in the inventory of Crown Jewels of France made in 1691. In 1791 it was valued at 48000 livres in another inventory.

It was stolen in September 1792 from the Garde Meuble, the same event as when the French Blue diamond disappeared forever. It was recovered in an attic in les Halles (a Parisian district), along with the Regent diamond, and some other of the gemstones that had been stolen. The recovery of the diamonds was due to a confession by a man called Depeyron shortly before his execution.

When the French Crown Jewels were sold in 1887, certain diamonds were excluded from the sale due to their historic interest, including the Horstensia.

There large crack/inclusion visible in the diamond, at the 7-o’clock position under the table. The combination of its colour, beautiful shape, and wonderful history make this a simply enthralling gemstone!