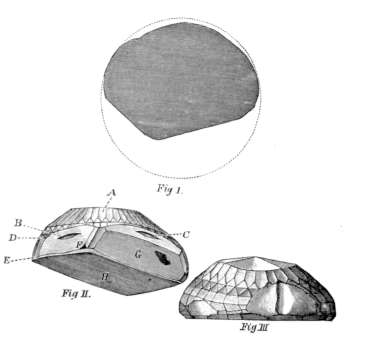 Drawings of the original shape of the Koh-i-Noor

One of the most famous diamonds in the world, it was believed that whoever owned the Koh-i-Noor rules the world. It is currently set into the crown worn by the female consort to the Monarch of the UK, and is currently on display in the Tower of London.

The known facts of the stone date back to 1304, when it was owned by the Rajah of the territory of Malwa in India, however the diamond may have passed through history for as long as 5000 years — some think that ancient Mesopotamian texts make reference to it as early as 3200 B.C. It weighed 793 carats uncut.

It passed through the Rajah’s family for two centuries, until it was came into the hands of Sultan Baber, the first Mogul emperor. His notes record that it “is so valuable that a judge of diamonds valued it at half the daily expense of the whole world”. Through his son, it continued down through the royal line, including Shah Jahan, who built the Taj Mahal for his queen, Mumaz.

In 1739, Nadir Shah of Persia invaded India, capturing Delhi, and seized the diamond. One story is that it was set into the eye of a Peacock Throne, however the other version of events is far more captivating! It was rumoured that the conquered Mogul ruler, Mohammed Shah, kept the stone hidden in his turban. When Nadir Shah discovered this, he invited Mohammed Shah to a feast, and suggested an ancient custom of exchanging turbans. The defeated ruler dared not refuse, and Nadir Shah left with the diamond. When he unrolled the yards of silk in the turban, the diamond fell to the floor, dazzling him so much that he is supposed to have cried “Koh-i-Noor”, meaning “Mountain of light”, and thus the diamond was named.

Below is an old watercolour of Nadir Shah on the Peacock Throne after the defeat of Mohammed Shah. (You can see the two peacocks on the canopy). 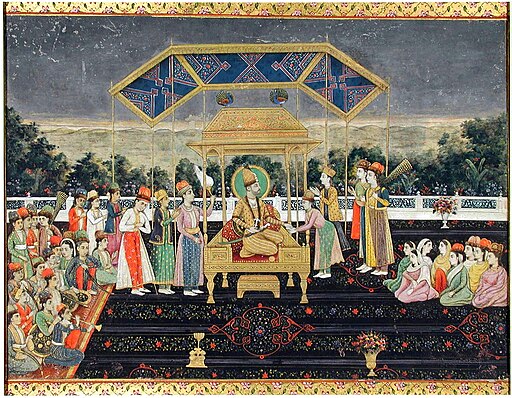 Keeping up with the theme of wonderful valuations, Nader Shah’s consorts supposedly said, “If a strong man should take five stones, and throw one north, one south, one east, and one west, and the last straight up into the air, and the space between filled with gold and gems, that would equal the value of the Koh-i-Noor.”

The stone went back with him to Persia, and later to Afghanistan, after his son, Shah Rokh, was overthrown.

After the Sikh wars, the Punjab was annexed by the British, and the diamond was taken by the East India Company as part of the terms of settlement of the war. They presented it to Queen Victoria in 1850, to mark the 250th anniversary of the founding of the company by Queen Elizabeth I. At the time it was valued at one million pounds.

The diamond was put on display at the famous 1851 Crystal Palace Exhibition in London. However, viewers were disappointed at the lack of fire in the stone.
The correspondent of The Times reported that “the diamond does not satisfy. Either from the imperfect cutting or the difficulty of placing the lights advantageously, or the immovability of the stone itself, which should be made to revolve on its axis, few catch any of the brilliant rays it reflects when viewed at a particular angle”.

Prince Albert decided to have its cut improved. Moses Coster, a cutter from Amsterdam, then the centre of diamond cutting, came to perform the operation. A steam engine was set up in the Crown Jewellers especially to drive the cutting wheel. Prince Albert placed the stone on the mill, and the Duke of Wellington started the wheel.

It took 38 days, and cost about twenty thousand pounds. The result was a loss of almost eighty carats, down to 108 carat oval brilliant.

We are fortunate to have replicas of the Koh-i-Noor before and after recutting, see below. You can see the loss in size, but also the increase in brilliance and fire.

Queen Victoria wore it in a brooch, which is perhaps what gave rise to the superstition that only a queen, rather than a king, can safely wear it.

Queen Alexandra, Victoria’s daughter in law, had it set as the centrepiece of a crown.

In 1927 it was moved to the crown of Queen Elizabeth (the Queen Mother). She continued to wear it, without Royal Arches, when Elizabeth II came to the throne. When Prince William comes to the thrown, Kate Middleton will wear it on state occasions.