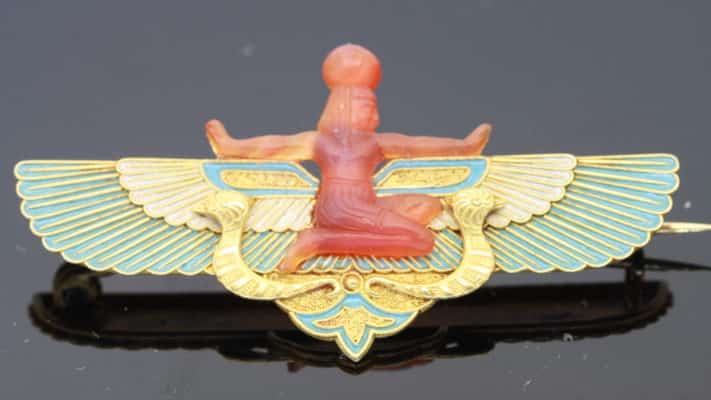 Important vintage brooch, in the Egyptian revival style, circa 1928/1930, depicting Isis, the Goddess of Fertility.

In the brooch, she is carved from hardstone, with arms outstretched and wearing an Egyptian headdress and surmounted by a sun disk. The three colour enamelling is beautifully done, and is in superb condition.

A little over 5cm wide. This is a once-in-a-lifetime find, of museum-quality.

From Wikpedia:
In Ancient Egyptian art, Isis was most commonly depicted as a woman with the typical attributes of a goddess: a sheath dress, a staff of papyrus in one hand, and an ankh sign in the other. Her original headdress was the throne sign used in writing her name

Beginning in the New Kingdom, thanks to the close links between Isis and Hathor, Isis took on Hathor’s attributes, such as a sistrum rattle and a headdress of cow horns enclosing a sun disk. Sometimes both headdresses were combined, so the throne glyph sat atop the sun disk. In the same era, she began to wear the insignia of a human queen, such as a vulture-shaped crown on her head and the royal uraeus, or rearing cobra, on her brow. In Ptolemaic and Roman times, statues and figurines of Isis often showed her in a Greek sculptural style, with attributes taken from Egyptian and Greek tradition 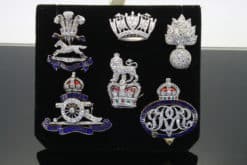 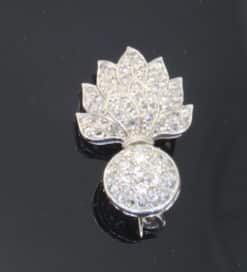