Omar Ramsden (1873-1939) was born in Sheffield in 1873, the son of an electroplate and silver manufacturer, and was one of England’s leading designers and makers of silverware.
At fourteen he was apprenticed to a Sheffield firm of silversmiths where he acquired technical training and experience of mechanized silver production. After this he attended evening classes at the Sheffield School of Art. While there, he won a succession of prizes and awards and met his friend and future business partner Alwyn Carr (1872-1940).

After several months travelling through Europe together, the two friends returned to England and set up a studio together in London. Their first commission was a mace for the city of Sheffield. In 1898 they registered their mark at Goldsmiths Hall in London and embarked on a partnership which would last until after the War, ending in 1919. Their work drew influence as much from the medieval period as from the contemporary Art Nouveau period The resulting output struck a balance between the traditional and the fashionable.

After the dissolution of their partnership, Ramsden retained the workshop and staff and registered his own maker’s mark. The business continued to flourish and Ramsden developed a distinctive house style that became heavier and more traditional than the fluid Art Nouveau of previous years. He placed more and more emphasis on the hand wrought appearance of each piece which he considered a unique creation. Ramsden continued working until his death in 1939 and today he is regarded as a master of British silversmithing. His work is still sought after, and his pieces are held by various important collectors and museums such as the British Museum and the Victoria and Albert Museum.

This necklace comprises two hinged covers over an enamel panel featuring St George, bezel set above and below with a circular amethyst. This necklace is published in both Art Nouveau Jewelry by Vivienne Becker, and The Art & Crafts Movement by Steven Adams. 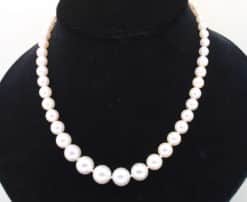