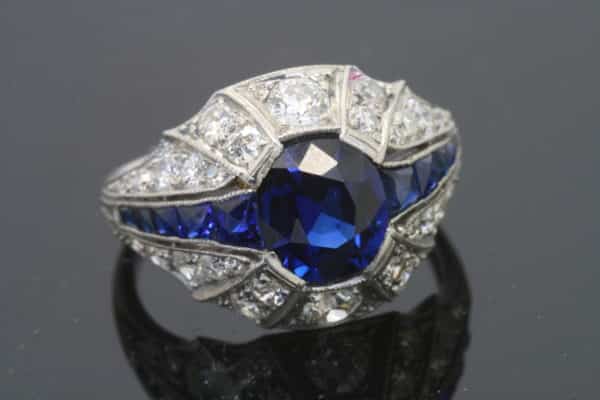 Superb sapphire and diamond ring by Paul Gillot, c. 1910. Set on platinum with a natural unheated sapphire of exceptional colour.

Paul Gillot arrived in New York in April 1902, to join Marcus & Company, a prominent retailer of artistic jewelry. Trained as a draughtsman, the 25-year-old Parisian came with a resume that included honorable mention in a competition organized in 1898 by the Chambre Syndicale de la Bijouterie for ‘a buckle or clasp for a waist belt, to be executed in gold or silver, without any gem motif.’ (In his review of the entries for Art et decoration, Henri Vever made note of the ‘happy disposition’ of masks and looping horns in Gillot’s drawing, singling it out as one of the show’s remarquables projects.)

Marcus & Company was renowned for its artistic jewelry and Paul’s designs contributed significantly in retaining clientele. A well-known and vibrant performer, Sarah Bernhardt, as well as notable officials and other high society persona wore his creations. Throughout his career, exposure to and collaboration with other jewelers and artists provided him with a deep appreciation and knowledge of fine gems. Although his Parisian roots were humble, by the time of his death in 1949, he had amassed the largest known collection of colored diamonds in 110 different hues. He was considered the “King of Diamonds”.

Gillot’s accomplishments reportedly included designing jewels for the coronet of the late King Edward VII of England and “the major portion of Sarah Bernhardt’s personal jewelry”.