Chelsea was known for its figures, initially mostly single standing figures of the Cries of London and other subjects. Many of these were very small by European standards, from about 21⁄2 to 31⁄2 inches (6 to 9 cm) high, overlapping with the category of “Chelsea Toys”, for which the factory was famous in the 1750s and 1760s. These were very small pieces which often had metal mounts and were functional as small seals, many with inscriptions in French, almost invariably amorous suggestions, but often misspelled. The set comprises Cupid preparing an arrow, with the inscription “Je le tendray pour vous” (I will keep it for you), a cherub sharpening a knife on a whetstone, a chicken with three chicks with the inscription “Aimons nos petits”, an angel sitting on a chimney, and an angel drinking from a wineskin, inscribed “L’Argent Fait Tout” (Money is everything) 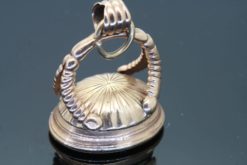 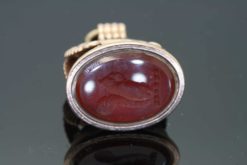 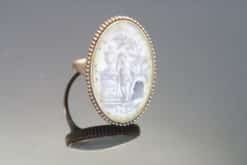 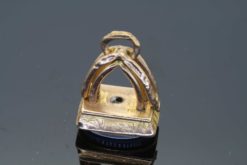 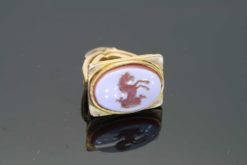