The Dresden Green Diamond is one of the rarest diamonds in the world, both in terms of its characteristics and of its provenance. Perhaps only the Hope Diamond can match its wonderfully documented history. It is a modified pear shape brilliant cut diamond weighing approximately 41 carats, and is the largest natural green diamond ever found.

It is named after the city of Dresden, where it has resided for most of the last 300 years.

It was found in the famous Golconda mines in India, probably around the start of the 18th century. The earliest known reference to it occurs in The Post Boy, a London newspaper. The issue dated October 25th – 27th, 1722 included this article:

“On Tuesday last, in the afternoon, one Mr. Marcus Moses, lately arrived from India, had the honor to wait on his Majesty with his large diamond, which is of a fine emerald green colour, and was with his Majesty near an hour. His Majesty was very much pleased with the sight thereof. It is said there never was seen the like in Europe before, being free from any defect in the world; and he has shown his Majesty several other fine large diamonds, the like of which ’tis said were never brought from India before. He was also, the 25th, to wait on their Royal Highnesses with his large diamond; and they were surprised to see one of such largeness, and of such a fine emerald color without the help of a foil under it. We hear the gentlemen values it at £10,000.”

The King declined to purchase the diamond, as did Frederick Augustus I of Saxony. Moses sold it to a fellow diamond merchant named Delles, who later sold the diamond (in 1741) to Frederick Augustus II of Saxony (son of Frederick I). It was set as part of the decorations on the Order of the Golden Fleece. It lasted only four years before Frederick Augusts ordered his court jewellers to create a new setting for the order, also using another diamond in his collection – the Dresden White, a cushion-shaped diamond weighing just under 50 carats. 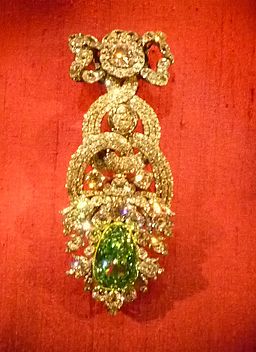 In 1768, Frederick Augustus had the Golden Fleece ornament unmade, and jeweller Diessbach remounted the diamond onto a hat clasp – a jewel that survives to this day. Since then, with only a few exceptions, the Dresden Greed Diamond has been displayed in the Green Vault (or the Grunes Gewolbe) of Dresden Castle.

Around 1813 it was transferred to Koningstein during the Wars of Liberation.

In 1942, contents of the Green Vault were again transferred to the fortress of Koningstein for safekeeping during the War, which prevented it being destroyed by the relentless bombing of the city by the Allies. The Soviet Trophies Commission took the contents of the Vault to Moscow as spoils of war. The Dresden Green Diamond remained in the Soviet Union until 1958, when the Soviets gave it back to Germany.

Between October 2000 and January 2001 it was displayed at the Smithsonian Institution in the Harry Winston Gallery alongside the Hope Diamond, and in 2005 it was briefly displayed in Japan.

The GIA examined the stone in 1988; it was discovered to be a rare type IIa diamond. The clarity grade of the diamond is VS1, and it is potentially internally flawless. (This means that any flaws are on or near the outer surface, and that a slight recutting could remove them. This is a controversial procedure on an antique or historic diamond, as the repolishing of the Wittlesbach Blue by Lawrence Graff proved. Coincidentally, the Wittlesbach Blue was also once in an Order of the Golden Fleece ornament, that of King Louis XV of France). The diamond’s symmetry was graded as good, and the polish very good, attesting to the quality of diamond cutting in the 17th and 18th century. The facet diagram below shows the shape of the diamond, a slightly rounded pear shape. The colour is of natural origin, and is evenly distributed through the diamond, unusual in a green diamond whereby the colour is normally only in a small area near the surface.